The 25-year-old Nigerian man, who carried out a brazen attack at the official residence of Guyana President, Irfaan Ali, was remanded to prison for the attempted murder of a Presidential Guard and discharging a loaded firearm. 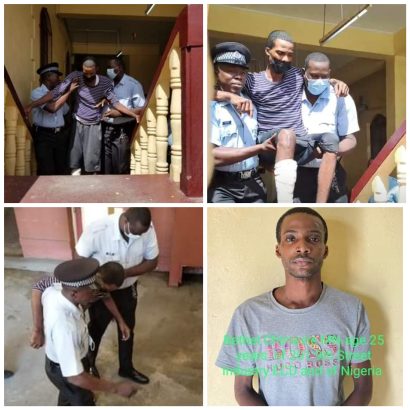 He had to be assisted into the courtroom by police officers from the court since he is still nursing a gunshot injury to a leg.

The second charge alleged that, on the same day and at the same location, he discharged a loaded firearm at Presidential Guard, Quacy Cummings. The unrepresented man was not required to plead to the two charges.

Assistant Superintendent of Police, Vernette Pindar-Whittaker, told the court that, on December 15, at about 07:30 hours, Chimezie went to the south-eastern entrance of State House and spoke with Perreira.

According to Pindar-Whittaker, Chimezie became annoyed, got up from the seating area and attempted to walk through the security hut inside the compound of State House.

Perreira attempted to block Chimezie but the man pulled out a knife from his shoulder bag and stabbed him five times. The men ended up in a scuffle and a female Presidential Guard came to Perreira’s rescue. She took out her service revolver, but Chimezie managed to disarm her.

Cummings, who was at the south-eastern entrance intervened, but Chimezie discharged three rounds in his direction. Chimezie then attempted to flee on foot.

However, Cummings pulled out his service weapon and discharged a round in his direction, hitting him in his right leg. He fell to the ground and was arrested.

Perreira and Chimezie were rushed to the Georgetown Public Hospital where they both underwent surgery.

Pindar-Whittaker told the court that Chimezie was released from the hospital on January 16, and was deemed mentally fit to stand trial. The Chief Magistrate remanded him to prison until January 26.

Following the attack, Perreira, a Constable, was promoted to the rank of Corporal for his courage.