Three internet fraudsters and one currency counterfeiter have been sentenced to fifteen years of imprisonment in Kaduna. 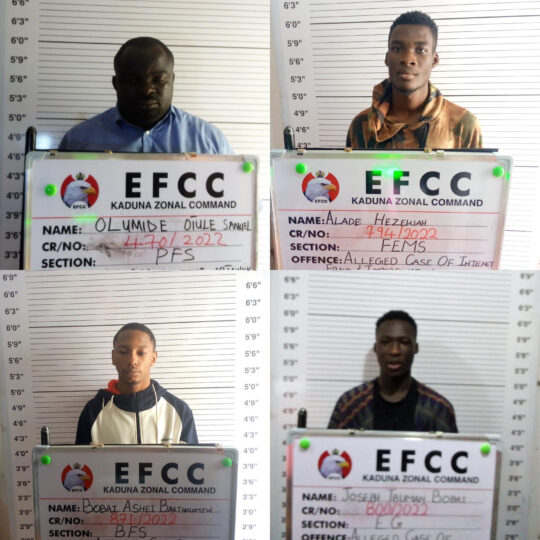 They were jailed on Thursday, after pleading guilty to separate count charges, upon their arraignment by the EFCC Kaduna Zonal Command.

The one-count charge against Hezekiah reads: “that you, Alade Olalekan Hezekiah (Jason Howard)sometime between May to August 2022 in Kaduna within the jurisdiction of this Honourable Court, did commit an offence to wit cheating by impersonation when you falsely represented yourself as Jason Howard (military personnel from the United States of America) and in such false identity induced one Sophia Johnson to send to you gift cards worth $1300(One Thousand Three Hundred USD) and you thereby committed an offence 308 of the Kaduna State Penal Code Law, 2017 and punishable under Section 309 of the same Law.

Meanwhile, the charge against Adamu reads: “That you, Aliyu Adamu on or about the 6th of June 2022 at the Kaduna, within the jurisdiction of this Honourable Court did attempt to commit an offence of cheating when you had in your possession a total Sum of N 877,000.00 pieces of N1000 counterfeit notes and thereby committed an offence contrary to Section 57 of the Kaduna State Penal Code Law, 2017 and punishable under Section 309 of the same Law.

The defendants pleaded guilty to their respective charges when they were read to each one of them.

Based on their pleas, prosecution counsel, M. Lawal prayed the court to convict and sentence them accordingly.

However, defence counsels: Godwin.O. Ochai, Abubakar.A. Muhammad, Abdulmalik.A. Taiwo and Daniel Bulusson sought the mercy of the court, pleading that the defendants are first-time offenders and remorseful

After listening to all counsels, Justice A. A Bello sentenced and convicted Hezekiah to five years imprisonment or pay a fine of N150,000.00 (One Hundred and Fifty Thousand Naira).

He forfeited his phones and the sum of $200.00(Two Hundred Thousand United States Dollars) to the Federal Government of Nigeria.

Truman bagged six months imprisonment or pay a fine of N150,000.00 (One Hundred and Fifty Thousand Naira). He also forfeited his phone and the sum of $200.00(Two Hundred USD) to the government.

Justice Bello convicted and sentenced Bartholomew to five years imprisonment with an option of a fine of N100,000.00 (One Hundred Thousand Naira).

He equally forfeited his phones and the sum of $200.00(Two Hundred US Dollars) to the government.

Adamu was convicted of currency counterfeiting and sentenced to five years imprisonment or pay a fine of N 150,000.00.

Three of the convicts; Hezekiah, Truman and Bartholomew were arrested for internet-related offences while Aliyu was arrested by officers of the National Drug Law Enforcement Agency, NDLEA, for being in possession of fake dollars printing paper and 1000 counterfeit Naira notes, totalling N 873,000 (Eight Hundred and Seventy-Three Thousand Naira).

He was handed over to the EFCC for further investigation and prosecution.

They were all prosecuted and jailed.